So….some may find it hard to believe. But I went to a Michigan State football game this weekend. Yep. You read that right. 23 years of believing that green and white were the colors of the enemy and I found myself sitting in Spartan stadium, cheering for MSU along with the other 70,000 State fans. Bizarre. This experience was…..difficult to describe. It was certainly uncomfortable (the guy behind me kept engaging me in a passionate conversation about his hatred for Michigan) and I had a much more difficult time detaching myself and just enjoying the game than I would have guessed. It seems we can really program ourselves to think a certain way (MSU is the enemy) and it becomes so much a part of you that you can’t shake it off.


I suppose I should explain. One of my best chums is, sadly, a State fan. But not just a casual, root for the underdog, Wolverine hater. He is totally legit. A real fan who, in many ways, puts me entirely to shame with his devotion to his team. So anyway, we each usually go to a game a year and take someone with us and this year we decided to take each other. I would go with him to see the Spartans and he would come with me to the Big House (which we are doing next month). So this past Saturday was our State day and we witnessed them destroy Northern Colorado.


It was certainly different from a UofM game. Mostly because I had to restrain myself constantly. I wore neutral colors and did my best to pretend I was a real Spartan (the other fans around me made me FAR too nervous to share my true allegiance) but I kept wanting to cheer when the Michigan score was announced. Still, it was a nice experience overall and I am glad I went. State played decently but committed a multitude of penalties. I think we have a good chance this year of beating them and getting things back to normal in this state. We’ll see in two weeks. 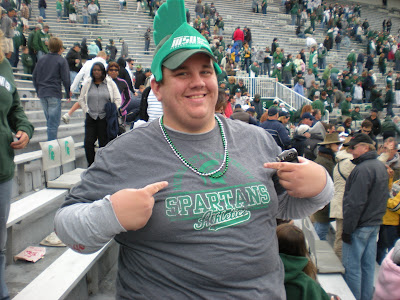 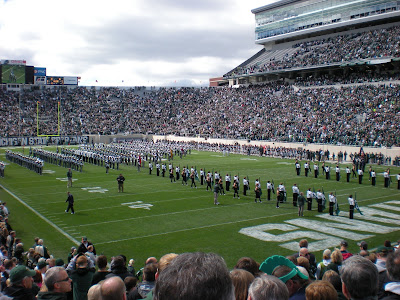